UN / Small Arms and Light Weapons : review conference of the programme of action

Illegally possessed and traded Small Arms and Light Weapons (SALW) continue to make a high number of victims each every day, all over the world, and contribute to fuel conflicts, terrorism, organized crime or street violence.

To address this problem, in 2001, Member States of the United Nations unanimously adopted the United Nations Programme of Action to Prevent, Combat and Eradicate the Illicit Trade in Small Arms and Light Weapons in All Its Aspects (PoA). This is the only consensual and universal instrument on small arms and light weapons.

The PoA is based on a series of political commitments and contains concrete recommendations to better combat the illicit trade in small arms and light weapons around the world, particularly regarding the collection and destruction of illegal weapons, the strengthening of import and export control procedures, public awareness raising, the improvement of the physical security and management of stockpiles, and to step up cooperation and international assistance in this area.

The mobilization of States within the Programme of Action has led to significant progress in combatting the illicit trafficking of firearms. In 2005, at the initiative of France and Switzerland, the PoA was supplemented by the International Tracing Instrument which seeks to establish international standards on marking and tracing small arms and light weapons. 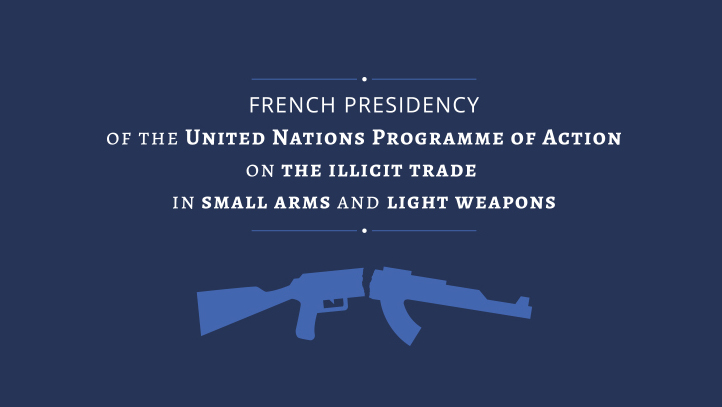 France will chair the Third Review Conference of the United Nations Programme of Action, to be held in New York on 18-29 June. This will be a unique opportunity to make progress in the fight against the illicit trafficking of small arms and light weapons.

The Review Conference will be chaired by Mr Jean-Claude Brunet, French Ambassador-at-large on transnational criminal threats and the fight against the illicit trafficking of small arms and light weapons.

France has conducted a comprehensive, transparent and inclusive preparatory process. Many consultations have already been organized with States, regional organizations and civil society, which will continue until June. The Preparatory Committee, which was held in New York on 19-23 March 2018, helped to confirm States’ strong interest in this Review Conference, and the relevance of the priorities driven by the French presidency: