After San Francisco, New-York, Sydney and Amsterdam… Paris, the world’s capital of diversity and sport! 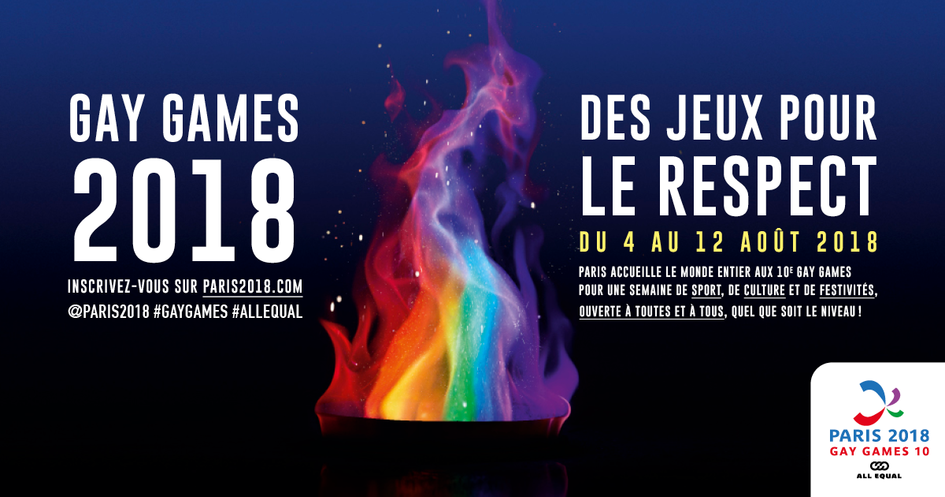 The Gay Games were created in 1982 in San Francisco. Held every four years in the world’s biggest cities, they aim to fight every kind of discrimination through sport, but also enable a wider public than just professional athletes to live the Olympic dream.

Their 10th edition in August 2018 will be held in France’s capital: Paris.

Under the high patronage of the Presidency of the French Republic, the Gay Games are held in partnership with the City of Paris, the Île-de-France Region and the Ministry of Urban Affairs, Youth and Sport. They are supported by 26 national sporting federations.

15,000 participants and 40,000 visitors will participate in 70 different locations in Paris and over the entire Île-de-France region in an original sporting, cultural, festive and academic programme, accessible at every level.

The 36 sporting events include a marathon and football matches but also swimming, fencing, petanque and roller derby competitions.

An original feature of the Gay Games is that the sporting competitions do not discriminate and are open to all, with no eligibility requirements. Abled and disabled people participate in the same event and a distinction is only made between them during the final rankings. The games are therefore adapted to the competitors so that everyone can find their place and have a chance to achieve new personal goals.

Some competitions which are traditionally for opposite-sex couples, such as dance, can also include same-sex couples. Conversely other competitions, for example those involving team sports are mixed gender.

All Equal: values that transcend sport

The Paris 2018 Gay Games 10 “All Equal” slogan symbolizes the society’s project behind the sporting event.

Relying on the Dress Code (Diversity, Respect, Equality, Solidarity and Sharing), Paris 2018 is also building an event in sync with the demands of a long-term vision.