Beaujolais nouveau in Paramaribo : a first for the « Primeur » wine

The French Embassy in Paramaribo in partnership with the Chamber of Commerce and Industry of French Guiana and the Courtyard by Marriott Paramaribo organized a tasting evening of Beaujolais Nouveau on Saturday November 19th, 2016, with the participation of a company from French Guiana and a specialized wineshop located in the Surinamese capital. It was an opportunity to discover what has today become a French tradition and also to taste other French wines.

Beaujolais Nouveau is a red wine made from the Gamay grapes produced in the Beaujolais region of France and is one of the first wines (“primeurs”) of the season in France released on the third Thursday of November at 12:01 a.m., just weeks after the wine’s grapes have been harvested. Several events are taking place in the region, in France and in several places over the world to celebrate the arrival of Beaujolais Nouveau in accordance with this popular French annual custom.

In Paramaribo, the event took place in a festive atmosphere with a band and lively French music. It is the first time, at least since years, that this celebration took place in Paramaribo, which showed again the openness to other gastronomies, cultures and exchanges particularly given the proximity with its French neighbor. 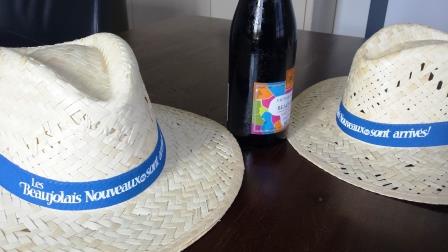